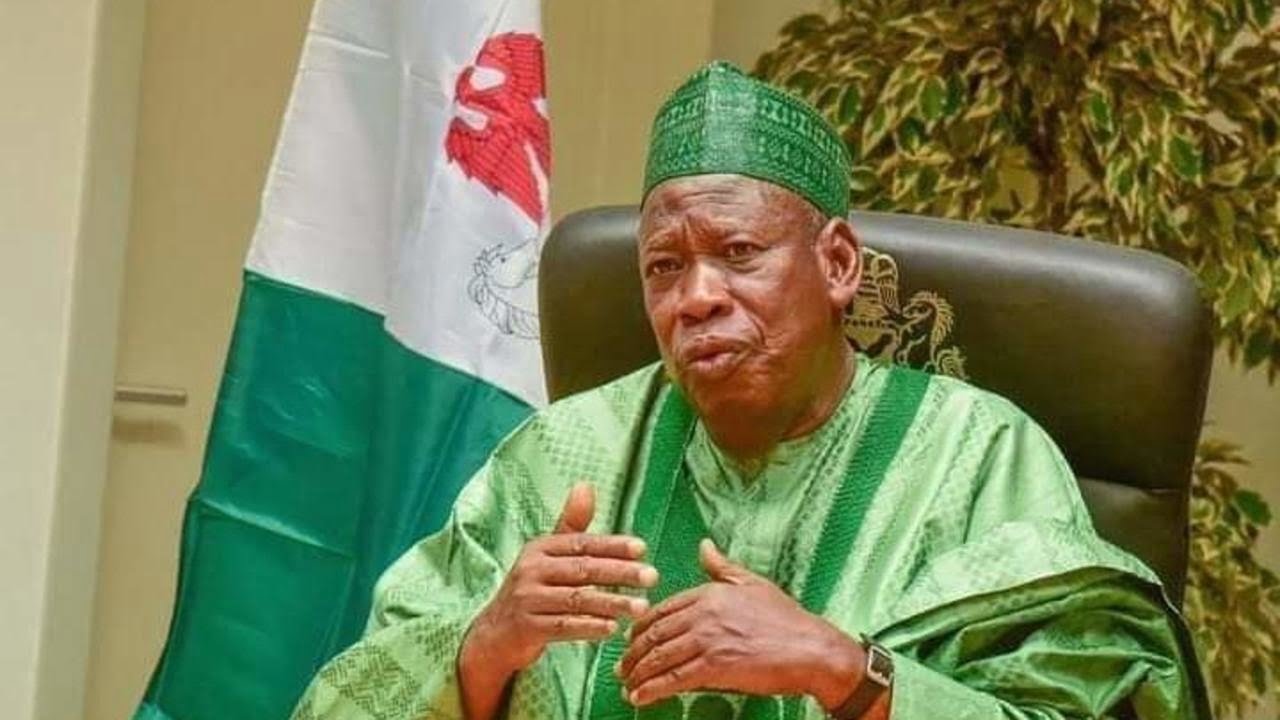 NEWS
Gov. Abdulahi Ganduje of Kano State has pledged to support the National Agency for the Prohibition of Trafficking in Persons (NAPTIP) in the fight against human trafficking.
This is contained in a statement signed by Mr Vincent Adekoye, the Assistant Head, Press and Public Relations Unit NAPTIP   in Abuja on Tuesday.
The governor made the pledge while receiving  NAPTIP management led by its Director-General, Sen. Basheer Mohammed in Kano, ahead of the inauguration of the state task force against trafficking.
He said that human trafficking is endemic in Kano state due to its status as an emerging business hub, coupled with other developments like roads, rail lines and others.
“We welcome the idea of the state task force on human trafficking. We shall partner with your agency and the task force will be given the desired support.
“The previous management of NAPTIP had narrowed their approach to issues of human trafficking alone.
”It is commendable you have identified other societal problems and ready to tackle them,” Ganduje said.
Ganduje also lauded the NAPTIP boss for his zeal, commitment and innovation in the agency which he said had led to the ongoing repositioning as well as hinting the state the mandate of the agency.
Mohammed said the task force would be carrying out the war on counter-trafficking initiative and made other components of the awareness about the agency.
He said part of the task force aim was to secure the support of critical stakeholders and other partners in the fight against the human trafficking menace and other social problems in the country.
The NAPTIP boss disclosed that Kano state was highly endemic based on the statistics available to the agency in the area victims rescue, arrest and prosecution of offenders.
“The problem of human trafficking and irregular migration have become national and international concerns.
‘Large number of Nigerians are trapped in sexual and labour exploitation in various African and European countries.
“Hundreds have continued to die in transit along the Sahara Desert and the Mediterranean Sea. in 2020, reports emerged about human farms in parts of Libya where black African migrants are allegedly kept in cages like animals.
“Organs like eyes, kidneys and lungs are harvested to service the medical needs of Europe, from inception to date, NAPTIP has rescued a total of 16, 277 victims of human trafficking,” he said.
He said out of that figure 14,474 trafficked, 1,287 are from Kano state.
”NAPTIP vulnerability index analysis showed that human trafficking is endemic in Kano.
“In the same vein, out of the total of 482 convicted persons by the agency from inception, 110 are from Kano zonal command of NAPTIP, representing the highest in the country.
“NAPTIP is worried over this ugly trend of the trafficking of young Nigerian women to the Middle East, who are mostly from Kano and neighbouring States. In the last 10 days, NAPTIP has successfully rescued 104 victims.
“The Kano command in the last two months successfully rescued another set of 12 Kano indigenes in Agadez, Niger Republic, who were victims of child labour,” Mohammed said.
He added that the 12 Kano indigenes had been successfully rehabilitated and reunited with their families in Kano.
Mohammed said that the collaboration was to strengthen the war against the menace and to bring the terror to as end, noting that, the challenges ahead of NAPTIP were quite enormous.
He further said that new initiatives must be developed to ensure adequate resources for the rehabilitation of returnee victims of human trafficking and Irregular Migration in order to mitigate both menaces.
NAPTIP boss said that bigger and adequately equipped shelters, vocational training facilities, empowerment programmes and scholarships must be put in place for the victims.
Mr Rafael-Rios Molina, the team leader for International and Ibero-American Foundation for Administration and Public Policies (FIIAPP), said that trafficking in Nigeria had become clandestine.
Molina, who was represented by Mr Segun Sanwo, a Project Officer with FIIAPP, noted that being a clandestine type of crime, a combine effort of all stakeholders was required to fight it.
“This is why FIIAPP support the establishment of the state task forces and is premised on the need to strengthen state and non-state multi-sectoral response towards combating human trafficking in Nigeria.
“It is not in doubt that the government of Nigeria have committed lots of funds into fighting this crime since the establishment of NAPTIP but it is believed that no single government can fight this alone.
“It is in the recognition of this fact that the EU have committed and still committing a significant amount of funds to Nigeria to help in reducing the crime.
“For instance, the burden of ensuring that NAPTIP team attended the inauguration of task force of these four states of Kano, Katsina, Kaduna and Jigawa.
“FIIAPP will continue to support all efforts geared towards combatting human trafficking especially, through the Action Against Trafficking In Persons and Smuggling of Migrants project which is fully funded by the EU,” he said.
Share this story