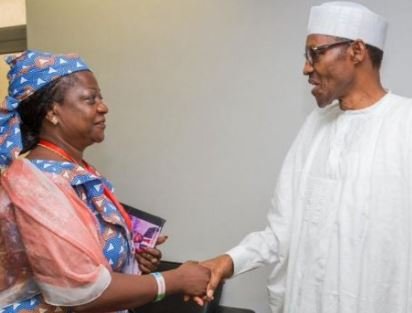 Senators are not about to back pedal in their opposition to the nomination of the President’s Special Assistant on Social Media, Lauretta Onochie, as a National Commissioner of the Independent National Electoral Commission (INEC)

Senators from the All Progressives Congress (APC) and the Peoples Democratic Party (PDP) are understood to have joined forces to stop the nomination of Onochie.

Some senators have also received video clips of interviews granted by Onochie from some interest groups to back up their opposition to her nomination.

Lobbyists are having a tough time trying to convince the lawmakers to accept Onochie’s nomination for the South-South slot.

In deference to the President, senators have made an informal representation to some principal officers to prevail on President Muhammadu Buhari to present a new candidate from the South-South.

But some governors have stepped in to save Onochie who they claimed has been doing only media job.

The letter said: “Pursuant to Paragraph 14 of Part I (F) of the Third Schedule to the Constitution of the Federal Republic of Nigeria 1999, as amended, I hereby forward for confirmation by the Senate, the appointment of the following four Commissioners for the Independent National Electoral Commission (INEC).”

The President’s letter however generated tension in the Senate with some PDP senators leading the opposition to Onochie.

According to investigation, the tension generated by the nomination of Onochie informed the “delay in referral or committal to the appropriate committee in the next legislative day after Buhari’s letter was read.”

It was learnt that some APC and PDP Senators met in Abuja on why Onochie’s nomination would not fly.

A ranking Senator in APC confirmed that some of his colleagues had been meeting informally on Onochie’s appointment.

He said while the senators would not want to confront Buhari, they have been sending emissaries to some principal officers to prevail on him to review the nomination of Onochie.

He listed the options available to the President as follows:

He said: “We have met with some of our colleagues in PDP based on public resentment against the nomination of Onochie.

“Even many Civil Society Organizations do not want her.

“It is interesting that APC senators are joining forces with PDP on this case.

“We do not want any crisis with the President but we have resolved to prevail on our leadership to ask the President to make a fresh nomination.

“So, there is probability that we will reject her. Most opinions do not favour her.”

A Senator from the North-West said: “Going by Section 14(2a) of the Third Schedule to the 1999 Constitution as amended, ‘a member of the commission shall be non-partisan and a person of unquestionable integrity.

“But I, as an APC senator, know that she is positively partisan. She has been giving PDP sleepless nights.

“We cannot shy away from the truth at all. Let her remain in the office where she has been doing a good job to protect this administration from the opposition.

“Some of us will surely oppose her nomination despite the fact that we are in APC.”

A PDP Senator said although the nomination of Onochie is yet to be referred to the appropriate committee, her “fate is sealed.”

He said: “The PDP caucus will stop her at all cost. We will not walk out. We will ask the President of the Senate to subject her nomination to vote.

“Some lobbyists have been reaching out to senators, including myself. But in this age, we have video clips and statements portraying her as partisan.

“Although the excuse we got was that she made those utterances in the line of duty, we have also told these lobbyists that she does not need to change her job which she is doing excellently well. Her stay in INEC will be perilous.”

Notwithstanding, some governors have been lobbying to ensure the confirmation of Onochie.

“Some of these governors claimed that Onochie has been doing only a media job, not a partisan assignment.

“They said the candidate has a very rich experience which should not be sacrificed on the altar of bias.

“This is the situation as I talk to you. We are waiting for the President to refer the nomination to the relevant committee,” a Senator added.