HomeNEWSNew Service Chiefs Must Not Confine Themselves To Politics – Wike

New Service Chiefs Must Not Confine Themselves To Politics – Wike 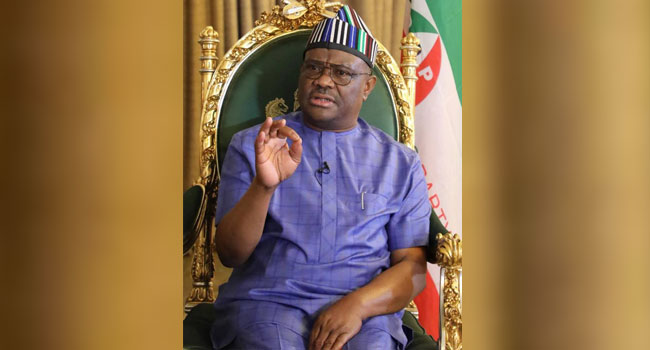 Governor Nyesom Wike has asked the new Service Chiefs not to confine themselves to playing politics.

Wike argued that it was the romance with politics that caused the former Service Chiefs to fail in prosecuting the war against insurgency.

This trip by the new service chiefs serves as the first operational visit aimed at better prosecuting the war against the insurgents and other miscreants across the country, a task which Governor Wike says is too enormous to be mixed with politics.

Governor Wike argued that the security problems the nation faced previously were based on the ‘fact’ that the former service chiefs were grossly involved in political inter-plays.

“This was the problem we had with the previous chiefs, they were involved in politics rather than face the security of the nation.

“Nobody can deny that fact; the moment you politicize security, then you are bound to have problems,” Wike stated.

The PDP chieftain said the nation appreciates the change of service chiefs, but warned that the issues do not end at the exchange of baton.

“The new people that are appointed must ask themselves, what is our agenda? Is our agenda to continue with where the last service chiefs stopped, or to make sure we improve?”

The President has done what every Nigerian expected he should have done.

The former chief of staff was involved in politics and that was why we had all the problems.