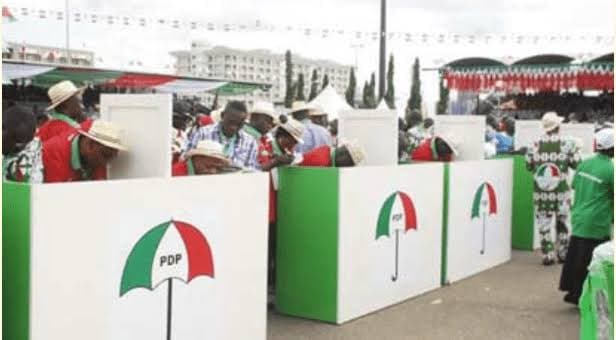 The National Convention of the Peoples Democratic Party (PDP) has kicked off in Abuja.

The convention which is scheduled for today and tomorrow is a crucial part of the party’s preparation for the 2023 elections in the country.

National party officials, governors, ex-governors, and other bigwigs of the party are currently at Eagle’s Square in preparation.

The convention is holding amid legal issues following the suspension of the party’s chairman, Prince Uche Secondus.

While tenure of the present crop of National Working Committee (NWC) is supposed to elapse in December 2021, the party had suspended Secondus.

This convention will produce new members of the NWC.

Others arrived on Friday night after the Court of Appeal sitting in Port Harcourt, Rivers State, ruled against Secondus and ordered that the convention be held. Governors National Assembly members, Board of Trustees (BoT) members, National Executive Committee (NEC) members, former ministers, aspirants for various offices and other PDP bigwigs and supporters are at the event.

'Best save I've seen in years!' - As Ramsdale Heroics Give Arsenal Win At Leicester