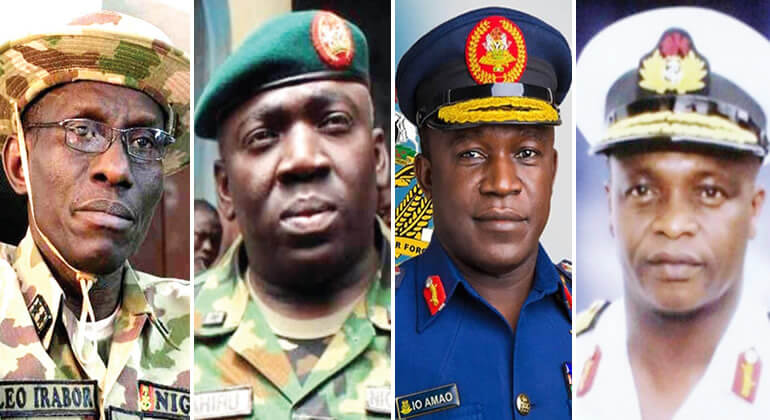 The service chiefs will be screened behind closed doors for security reasons, according to Chairman of the House Committee on Defence, Babajimi Benson, who spoke on Monday.

Speaker of the House, Femi Gbajabiamila, had last Wednesday read a letter from the President, Major General Muhammadu Buhari (retd.), seeking the confirmation of the new service chiefs.

Buhari’s letter was dated January 27, 2021, while the stamp on the acknowledgement copy indicated that it was received on February 5, 2021.

Gbajabiamila later constituted a panel made up of chairmen, deputy chairmen and some members of the military-related standing committees, to be led by Chairman of the House Committee on Defence, Mr Babajimi Benson.

When contacted on Monday, Benson said, “It will hold on Wednesday at 10 am.”Benson, however, noted that the House and the Senate would conduct a parallel exercise. He said while the opening session would be open, the proper screening would be done in secret.

He said, “You know that for security issues, you don’t want to put information out there that the enemy will use against us. We will make some opening remarks but the main ‘question and answer’ session (would be behind closed doors).

“Nigerians should rest assured that we have moved (and adopted) several motions on insecurity and those resolutions are uppermost in our mind. We want safety and security to return to our national life. We are mindful of all that.”

The Senate committees responsible for oversight over the Nigerian military are also billed to conduct a closed-door, separate screening exercise this week.

It was reported exclusively on January 27, 2021, that Buhari’s appointment of service chiefs on Tuesday violated a 2013 judgment of a Federal High Court, Abuja.

The judgment, which was delivered by Justice Adamu Bello on July 2, 2013, stated that it was mandatory for the President to obtain the confirmation of the National Assembly for the appointment of the service chiefs.

The Presidency had later transmitted the appointments to the National Assembly for confirmation.

The House had said the chiefs of the new service would remain in an acting capacity until the parliament confirms their appointments.

Chairman of the House Committee on Media and Public Affairs, Benjamin Kalu, in response to our correspondent, had reacted to the judgment of a court in a suit filed by the current Minister of State for Labour, Employment and Productivity, Festus Keyamo (SAN).

Just like several Senior Advocates of Nigeria who insisted on compliance with the judgment, Kalu had said it was necessary that the parliament confirms the appointments.