We have moved beyond Ben Nwoye – Chukwunta, Enugu APC Chairman 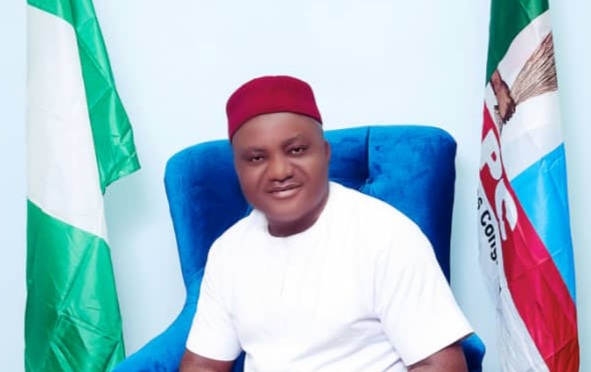 He said the State APC is at Peace, United and does not need the court to remove any erring Officer.

Prince Chikwado Chukwunta, made this remarks while briefing journalists on his achievements in office in the last one Month.

“You people should recall that, prior to my assumption of office on 10th of August, 2021, the Party was thrown into another round of crisis when the former chairman of the Party Dr Ben Nwoye, went to swear in some people on 3rd of August, after the Ward congress of our Party on the 31st of July, against the constitution and congress guidelines of our Great Party, APC.

“The Congress guidelines states that there shall be a Ward congress, followed by an appeal before anyone is deemed to have been validly elected at a congress but the former chairman in his usual way of causing trouble for the party in the state to justify the huge money he is receiving from his pay master, went to inaugurate some people handpicked by him as ward executives, even before the appeal committee was set up by the party at the National level.

“There after he called a SEC meeting on the 10th of August, where he was removed by over 2/3 of SEC members. We don’t need a court to remove any officer of the Party.

“Our constitution is very clear on that. Ben knows, just like any other Party faithful, that he is no more the Chairman. The national officers of our party who appointed all of us as State Caretaker committee members have given their approval in a letter sent to the state party.

“So, people should disregard whatever, song he is singing. You know my former boss is a nightingale, he sings a lot of songs in different tones, morning, afternoon and night. Today, it is Distinguished Senator Ken Nnamani, a former Senate President, tomorrow, it is Chief Geoffrey Onyeama, our performing Minister of the Federal Republic or Former Governor Sullivan Chime, a man who made an indelible good mark in Enugu State as Governor or Joe Orji, PhD, former Governor of Gombe State or any of the numerous Leaders of our party. But, pls let my former boss know that, we have gone beyond Him and his gang in APC Enugu State. We can’t be distracted anymore.

“At the moment we are building a new APC that is capable of winning elections in Enugu State come 2023, which is already around the corner. What will a former Chairman, who under his watch for 7 years could not win a councillorship election, let alone a State House of Assembly seat be telling party faithfuls both in Enugu State and Nigeria at large? Which administrative competence is he bringing on board to enable us win elections? He was in charge since 2014 till 10th of August, 2021.

“We are now in the congresses that will end this tenure, instead of him going un-noticed, he decided to continue fictionalising the Party for his selfish gain. Well, this is his stock in trade, so we are not surprised. What else has he to offer in the remaining few weeks of this administration that he could not offer in the last 7 years? Nothing. Absolutely Nothing.

The Acting Chairman said that in the entire APC South East, it was only Nwoye’s administration in Enugu that could not win any seat since 2015 till date. I’m not proud of that and no one should be .

He promised that under his watch, there was a renewed hope, their is unity among the major stakeholders of the Party, “My leadership is not and will not be insulting other leaders in the media. Every member of this Party is giving a sense of belonging. Where there are issues, which is normal in politics, we will resolve it as a family. By the time we achieve this orderliness and respect for one another, more political leaders will be rushing to our party because APC is the Party for 2023 elections in Enugu State and Nigeria.

“My Team and I, will achieve a peaceful and harmonious congresses in Enugu State, irrespective of what anyone is doing because APC Enugu state has grown beyond one Man.

“I want to use this opportunity to call on my former boss and friend whom I have supported so much, financially and otherwise as Chairman, Dr Ben Nwoye to prove me and other book makers wrong by allowing peace and subjecting himself to the party constitution and congress guidelines that he swore to uphold. He swore to this in 2014 as elected Chairman, in 2018 as elected Chairman for a 2nd term in office and in 2020 as Caretaker Committee Chairman. I also swore to uphold the same constitution in 2016, 2018 and 2020 as Deputy State Chairman of our Great Party. Now, in 2021 as Acting Chairman. I intend to uphold the constitution and congress guidelines.

“My former boss should remember, that it is APC that gave him political prominence, including a federal appointment . He should reject those pushing him over board. This Party can accommodate all of us including new members.

“Finally, I want to thank all who saw the need to rebuild our great party in Enugu to provide credible opposition in the State and prepare for taking power in Enugu State for better democracy and better Enugu State. It is my singluar wish that our dear State will be better than what it is today through our great party, the APC, he concluded.