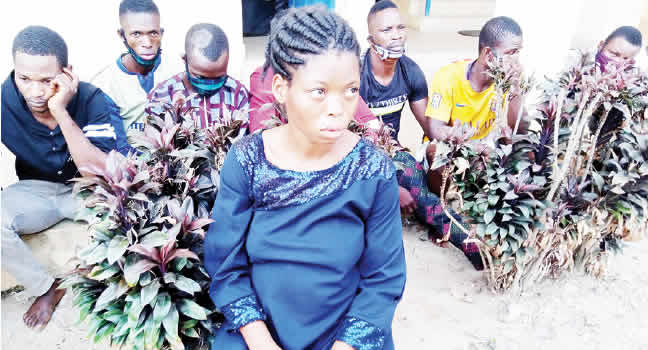 A 24-year-old housewife resident in Ede, Osun State, Mariam Musa, has confessed to killing her stepson because her husband cared more for the boy’s mother.

Mariam, a tailor, was one of 12 suspects arrested for various crimes across the state.

They were paraded on Tuesday by the new Osun State Commissioner of Police, Wale Olokode, in Osogbo.

The suspect said the three-year-old boy, Rokeeb, left his mother and came to her room on the day she committed the act, adding that she put insecticide in the victim’s mouth, which killed him.

Mariam, who is five months pregnant, said the mother of the deceased used to disrespect her because she was the favourite of their husband.

She also said after committing the act, she felt remorseful and confessed to her husband.

“Greed and jealousy made me kill the son of my husband’s second wife. She had a male child and I was not happy that our husband was showing her more care,” Mariam said.

He said, “The 12 passengers in a Sharon Volkswagen were coming from Ekiti State, and heading for Offa in Kwara State. On getting to Asi along Oyan Road, in the Odo-Otin Local Government Area of Osun State, they were attacked by gunmen and kidnapped.

“The intensive combing of the bush led to the arrest of two members of the gang, and the kidnappers were forced to release the remaining six victims on Friday. The victims have since reunited with their families.”

Also paraded were Garuba Lukman, Tajudeen Monsuru, Hamsat Akeem and Yusuf Awayewaserere, who were arrested for murder, conspiracy and selling of human parts in Iwo town.